A STORY OF PEOPLE

All our wine growers have contributed to the development of the winery with their typical energy. The older wine growers have passed on know-how and vineyards to the next generation, who has continued to work with us. Others joined us because they wanted to be part of the cooperative “family”. All share a love of their heritage, the Beaujolais and its terroirs. 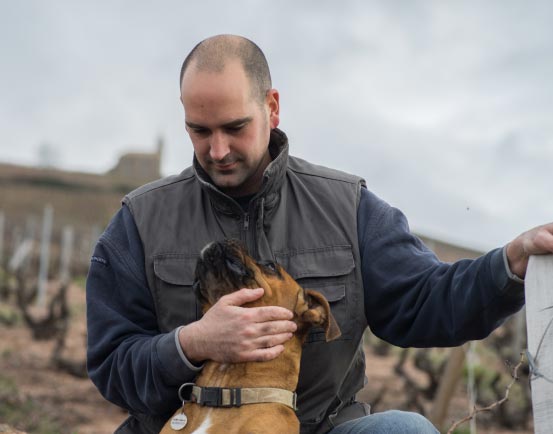 Father to a 2-year-old daughter, Guillaume took over at the 10-hectare family domaine 9 years ago. But my father, who is over 70, always comes along to help me in the vineyards, he loves his job too much to forget it!

He loves to be outdoors, whatever the weather, working on the steep slopes of the Beaujolais, accompanied by his young dog … From the bottom of the hills, in the Moulin-à-Vent appellation, to the top of the hills, in Fleurie and Juliénas, the landscape changes completely… the work isn’t the same from one plot to the next, but it’s still the Gamay grape! The best part of my day? Early in the morning when, from my vineyards, I can see Mont Blanc standing out on the horizon, around 200 kilometres away.

Jonathan is the typical big brother. He transmitted his love of the land to his brother, Morgan. This love of the land comes from their father, also a wine grower. We were brought up in the vineyards; so today we like being outdoors, whether in our vineyards, in the woods or fishing … We don’t like to roam too far away from our Beaujolais home, this is where we feel the most comfortable!

Although they each have their own vineyard plots, one in Fleurie, the other in Chiroubles, they like to work together.
At the end of the day, we take a look at the work accomplished, together; then we meet at either my home or his to enjoy a glass of Fleurie and share a few vineyard stories…

The brothers have never regretted their decision to join the Cave de Fleurie cooperative. 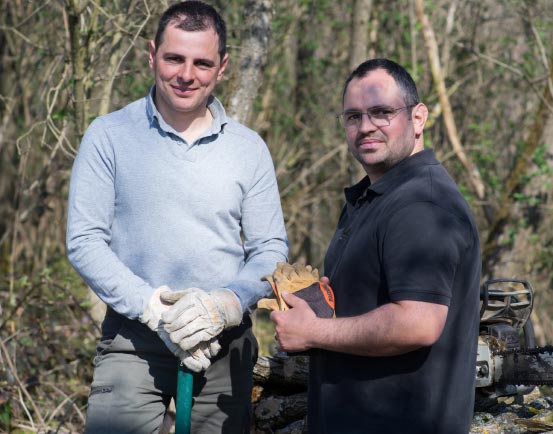 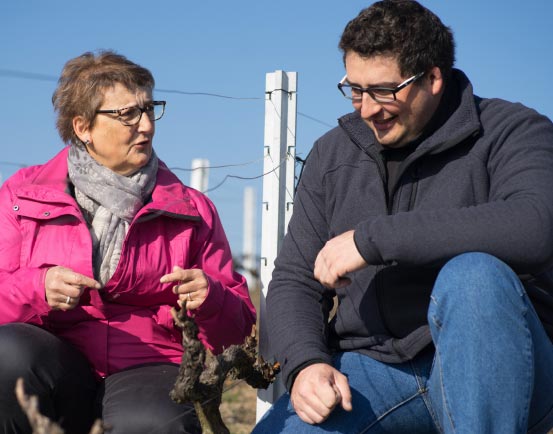 Mother and son, Annie and Nicolas, each have their own domaine, but work together. We pool our resources; as with the Cave de Fleurie! They carry out the work in the vineyards collaboratively: Annie pruning, attaching the vine shoots, disbudding, and Nicholas handling the mechanized work. Throughout the growing year, decisions are taken together, as a family…

But when it comes to the harvest, Annie runs the show!

The vines worked are family-owned. My family has had vines in Fleurie for many generations but we’ve been working with the Cooperative since the 1950s.

Nicolas acquired his vines in Chénas. There is a deep complicity between mother and son. Wine growing is a real family affair.

Hervé loves being up at the crack of dawn… for him, walking through his vineyards illuminated by the first rays of sun is a magical moment. He took over at the family domaine in 1996. He joined the Cave de Fleurie wine cooperative like his father before him. He loves the approach and atmosphere at the winery. There’s a good vibe and you can feel there’s a real will to move forward. It’s motivating.

Three years ago, he decided to replant some of his vineyards with Chardonnay, thereby expanding the Cave de Fleurie range. This is a new challenge for me. I chose the plots carefully to ensure that the Chardonnay feels at home. 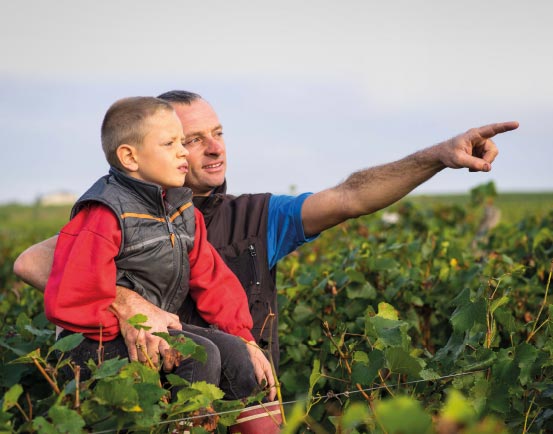 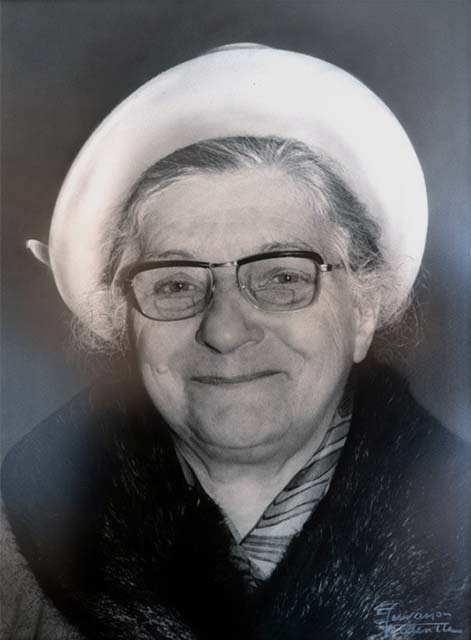 This extraordinary woman took up the reins at the Cave of Fleurie in 1946. She presided over the winery for almost 40 years with an unerring vision. The first female president of a wine cooperative in France, her strong personality ensured that her ideas were listened to, despite the predominantly male and very macho environment! Expressing her beliefs in her typically direct manner, she was tenacious and pugnacious, particularly when it came to defending the interests of the Fleurie Appellation.

Marguerite Chabert will remain the key figure in the history of the Cave de Fleurie. Two wines bear her name today.

I declare that i am of legal drinking age
Posting....